Northwest Argentina is home to one of the most incredible landscapes in the country. The route from Salta to Cafayate goes through the Quebrada de las Conchas, a nature reserve within the Calchaquí Valleys where you can see different rock formations that make up one of the most attractive places in Argentina.

The National Route 68 is one of those roads that leaves every traveler speechless. The 183 km from the city of Salta to Cafayate are truly a must for anyone visiting Northwest Argentina. Valleys, mountains, lost towns, rivers, bridges and vineyards will follow you all the way.

The most beautiful part of the route is Quebrada de las Conchas (Shell’s Gorge), 80 kilometers of the route where you will spot different rock formations. In this part of the route, the reddish mountains appear at the front and you will want to jump out of the car to take photos and admire the beautiful views. 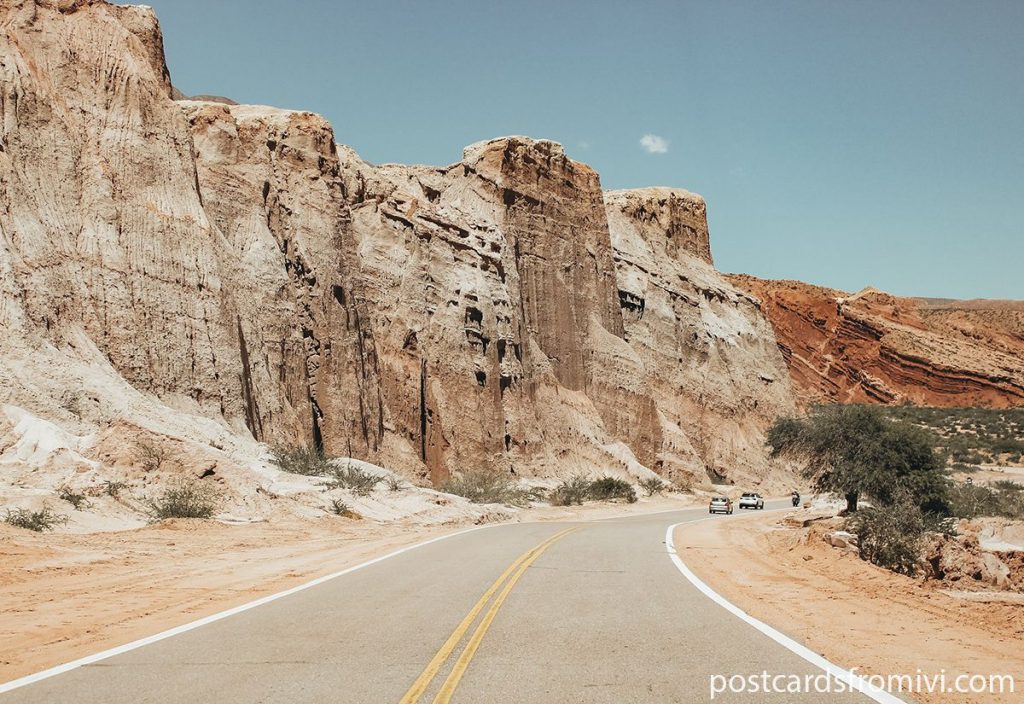 Where is the Quebrada de las Conchas?

The Quebrada de las Conchas is located about 140 km away from the city of Salta which is the capital city of Salta province, one of the main regions of Northern Argentina. The Quebrada is part of the Calchaquí Valley, an area which crosses the provinces of Catamarca, Tucumán, Jujuy and Salta. It is one of the most beautiful regions in Argentina and I always recommend people visiting my country to take a trip up north.

The Quebrada de las Conchas is a very special archaeological place since the rock formations seen today were once marine. The water eroded the rocks for millions of years and shaped them as we see them today. Fossils of different animals are found in the nature reserve and it is also a very important area for bird conservation in Argentina.

In March 2020 I visited Salta for 3 days with my boyfriend and we loved being able to take a road trip to Cafayate, it is really a a region worth visiting. In this post I will tell you about our experience and what we visited.

How to get to Quebrada de las Conchas?

There are two ways to get to Quebrada de las Conchas and visit all the main attractions: you can rent a car in Salta and drive there or take a day tour from Salta to the Quebrada and Cafayate.

We decided to rent a car to be able to drive at our own pace and stop as many times as we wanted. This is the best way to enjoy the views. This is one of the best road trips in Argentina and you will not be disappointed.

We booked our car in “Salta Rent a Car” through rentalcars.com. I usually use and recommend this company because it is a website that compares the prices of all rental companies and usually offers a lower price. This was the case.

We picked up the car at Salta airport early in the morning and started the road trip to Cafayate.

The total journey from Salta to Cafayate takes about 3 hours, but it really depends on how long you stay at each stop. We pulled over several times to take photos with our drone without rushing. The road is in good condition.

If renting a car is not within your options, you can take a tour from the city of Salta to Cafayate. The good thing about taking a tour is that you will be able to completely enjoy the views.

This guided day tour to Cafayate includes pick-up and drop off at your hotel in Salta, bilingual guide in Spanish and English, stops in all the Quebrada de las Conchas highlights and the entrance to a local winery in Cafayate. It’s an excellent option to see everything in one day.

If you have more time, you can consider taking this 2-Day Tour to Cafayate where you will visit the same spots as the day tour but at a more relaxed pace as you will be staying for one night in Cafayate. I strongly suggest you stay for a night if you have the time.

If you are going to visit the Quebrada de las Conchas by car, I suggest you start early so you have time to make the stops without rushing. We arrived at Salta airport, picked up the rental car right there and started the trip to Cafayate at around 10 AM.

The first part of the route goes through a series of towns on the outskirts of Salta. For several kilometers there is nothing too interesting until the red mountains begin to appear in the distance.

The most amazing landmarks of the route are in the Quebrada de las Conchas reserve, almost reaching Cafayate. The most important places are the following: 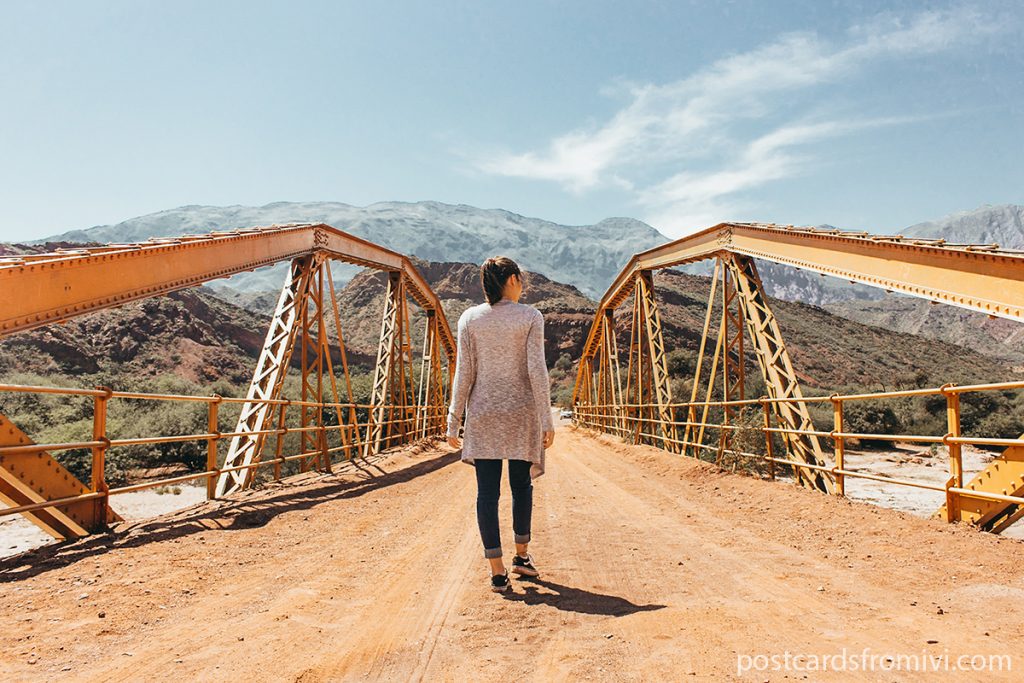 This bridge that passes over the Las Conchas River became famous after the Argentine film “Relatos Salvajes” (Wild Tales) was filmed here. This Oscar-nominated movie is made of 6 stories about situations where things get to the most extreme limits and in this same bridge one of the most epic scenes takes place.

If you haven’t seen Relatos Salvajes yet, I suggest you do it immediately! You can find it on Amazon here.

Nowadays the bridge is not in use (there is another one next to it) but everyone who saw the film stops to take photos. You will see a sign on the route with an arrow indicating “Relato Salvaje” that makes it quite clear where the bridge is found: 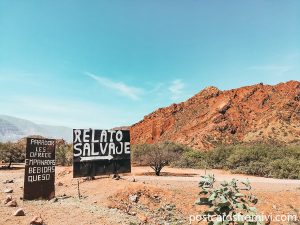 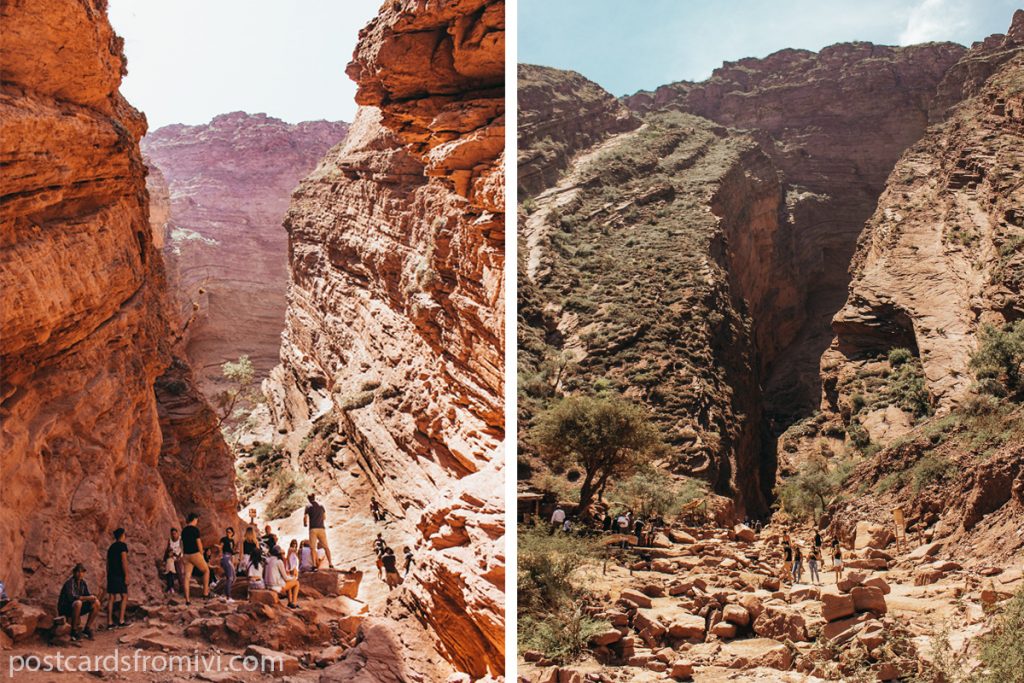 Garganta del diablo (Devil’s Throat) is one of the most incredible stops on the route from Salta to Cafayate. I don’t have many words to describe it… the rock formation has taken a very crazy and narrow shape that makes it a very interesting place. 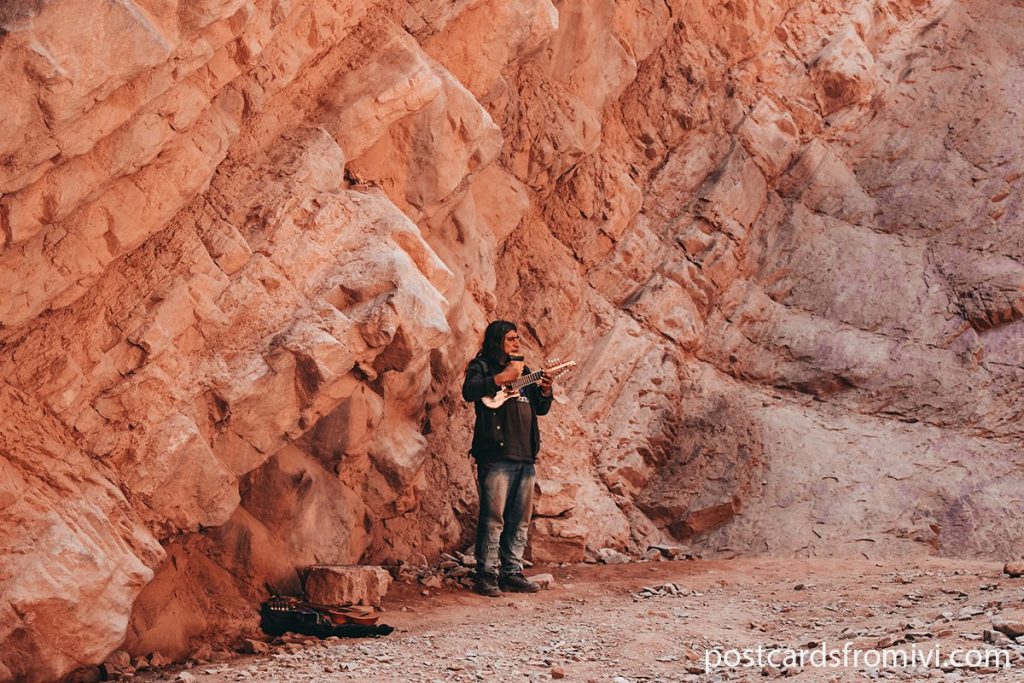 This is without a doubt the most popular stop on the route. The erosion of the water molded the rock for millions of years until giving it this particular shape. Due to its circular shape and 20-meter-high walls, The Amphitheater has unique acoustic qualities, some even compare it to the acoustics of Teatro Colón (a theatre in Buenos Aires which is among the best thetres in the world).

In El Anfiteatro you will probably find musicians playing typical music from northern Argentina and you will be able to experience the great acoustics.

If you look from the right angle, this rock looks like a giant toad. It can be seen perfectly from the route. 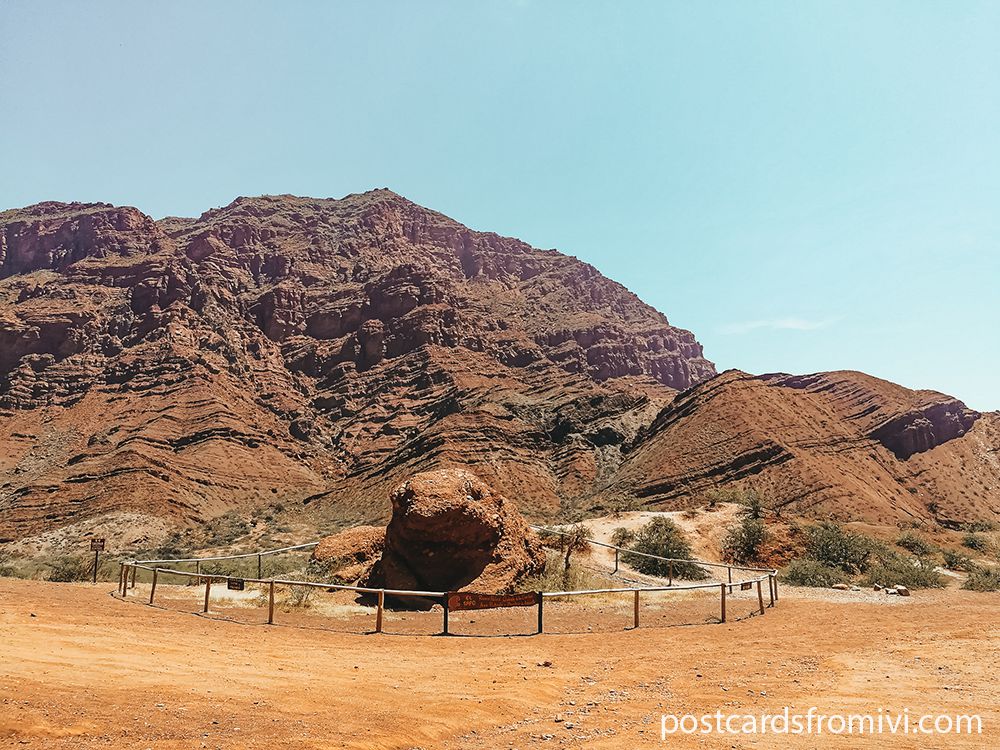 Another rock that can be seen from the route without getting out of the car is El Obelisco, which is a bit disappointing honestly. This obelisk is just a little shorter than the original located in the city of Buenos Aires… 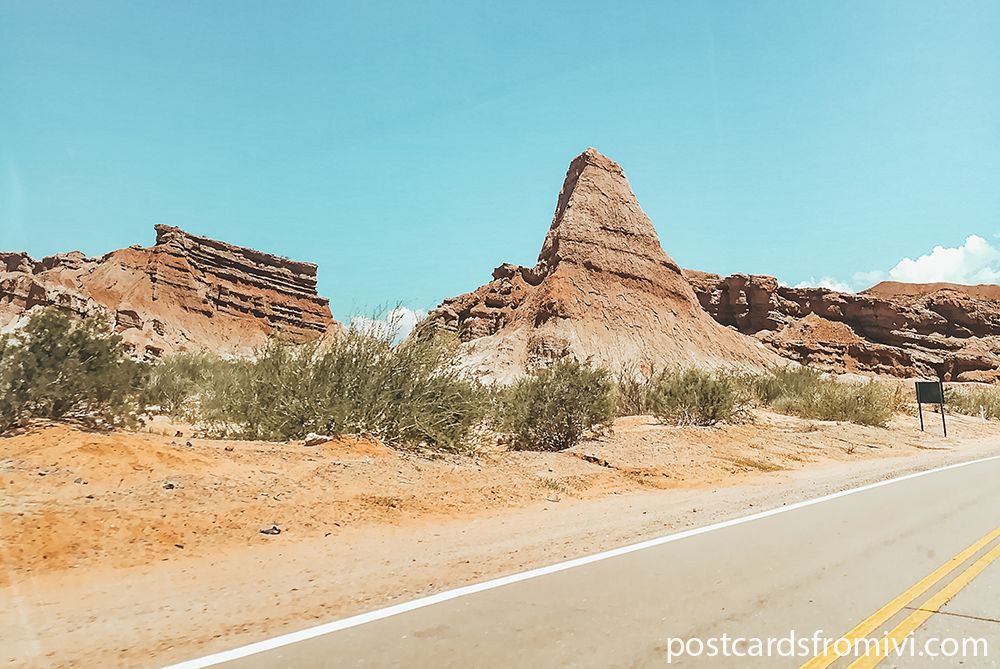 Los Castillos (The castles) is one of the most impressive landmarks on the route. An immense rock mountain with its characteristic reddish color and its shape that makes it look like castles.

The Castles seem immense even seeing them from the other side of the Las Conchas River. Although the river is sometimes dry it is advisable NOT to cross it since there is a danger of collapse. We were able to take this picture with the drone: 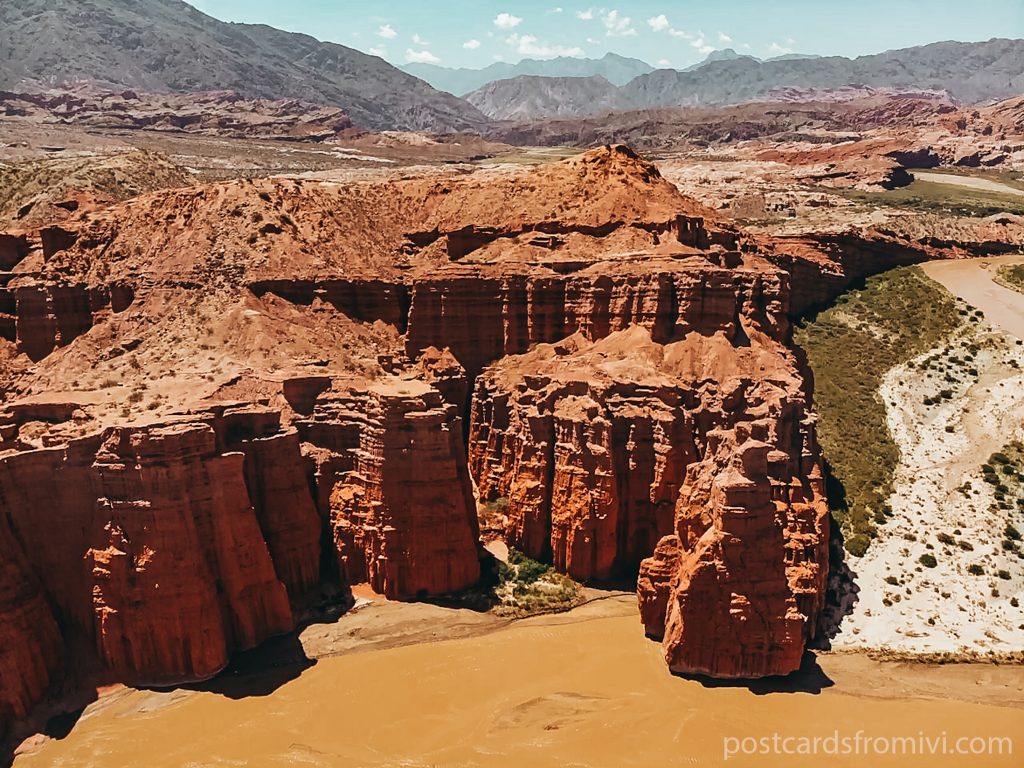 This is a stop that I had not heard of before the trip and I was very surprised. This huge walls of reddish stone continue for kilometers. I highly recommend this stop!

Other interesting points of the route where I didn’t stop or don’t have photos are: El Fraile, Las Ventanas, Casa de loros and La Yesera. There is also a town called Alemania, located 100 km from Salta city, that I didn’t visit but seems very interesting. It is an almost ghost town that once had a railway station now abandoned.

As you get closer to Cafayate you will spot the rows of vineyards lined up next to the route. Cafayate is known for the Torrontés wine which is the local grape. The town is the last stop in Salta’s “wine route” and there are around 15 wineries to taste local wines. We visited Piatelli Vineyards. You can read more about the visit here: Wine tasting in Cafayate: Bodega Piattelli Vineyards

Once we arrived in Cafayate, we went straight to have lunch (we had empanadas which is one of the typical foods in this region of Argentina) and then we checked into Grace Cafayate boutique hotel where we spent 2 nights. You can read more about my experience at the hotel here.

If you have more days to visit northern Argentina, I recommend you visit Tucumán province. Cafayate is only about 30 km away from the north of this province.

↣ If you want to know more read: What to visit in Tucumán in 3 days

I hope you found this post useful to plan your trip to Quebrada de las Conchas in Salta. I truly believe it is one of the most beautiful regions in my country and you won’t regret visiting it. You can see my Salta pictures on Instagram under the hashtag: PFISALTA

This post contains affiliate links. That means, if you click on certain links within this post and make a purchase, I earn a small commission at no extra cost to you. Read more about it here.