London is one of the most interesting cities to visit for architecture lovers. In its streets, it is possible to see a mixture of different architectural styles and historical periods. On this London architecture tour you’ll learn about some of the best buildings in the city.

London is a city where many historical events happened. However, it is only possible to identify certain periods in its buildings since the vast majority of the buildings were destroyed in the Great Fire of 1666.

Very few buildings survived the fire, like the Tower of London and some Tudor buildings. In this guide I am going to talk mainly about the buildings that were built after 1666. 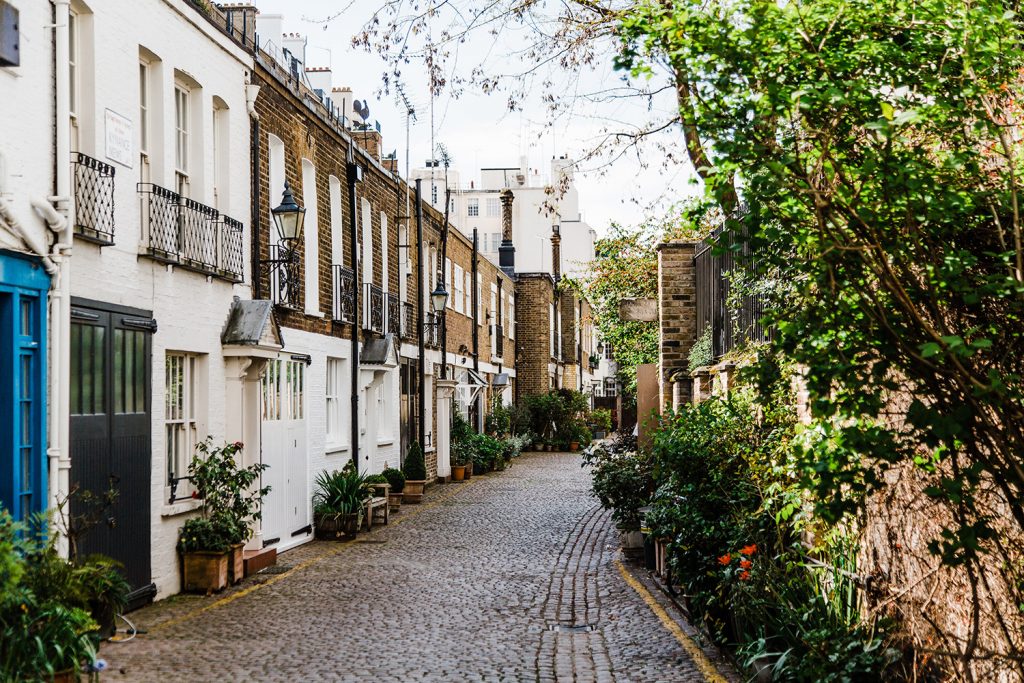 One of my favorite places in London are its mews. Mews were small houses where the upper class people used to keep their horses and carriages. These houses also had a space for servants. Mews were built in London during the 18th and 19th centuries and can still be found in the city.

Today mews are someof the most expensive places to live in London. The great benefit of living in one of these houses (apart from being so pretty) is that they face a narrow cobbled street, where no cars can access. If you are visiting London, you can visit some of its mews such as: Kynance Mews, Osten Mews, and Drayson Mews.

After the Great Fire, a city reconstruction program was carried out in which Sir Christopher Wren was in charge of rebuilding many buildings in the city, including 52 churches. 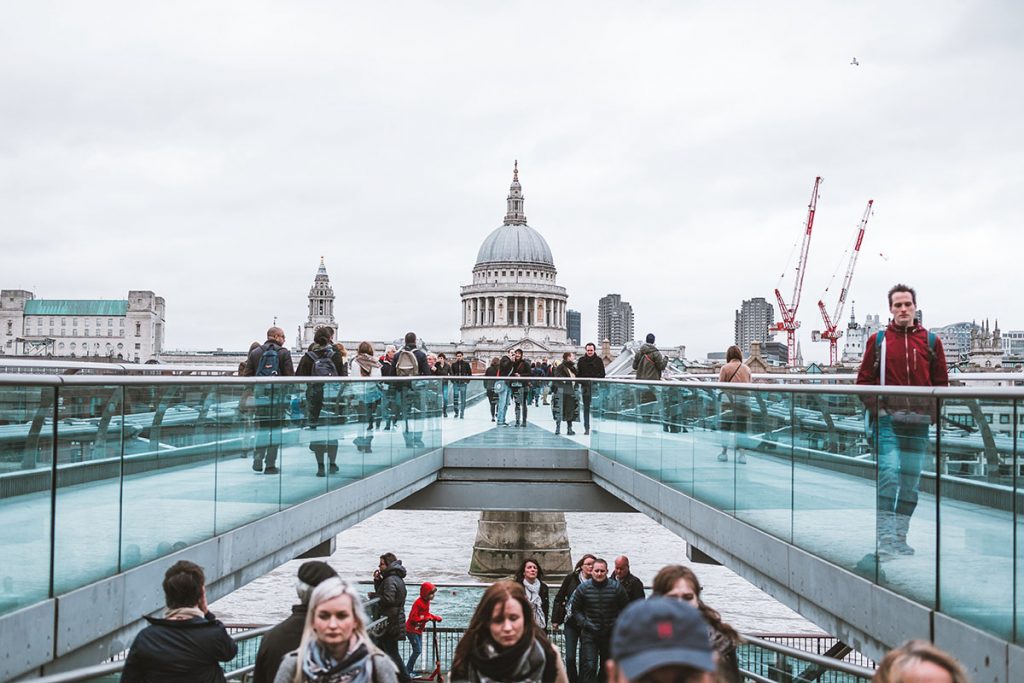 Wren’s most recognized work is St Paul’s Cathedral. The church was built on the ruins of an ancient medieval cathedral which burned in the fire.

The dome of the cathedral is one of the great icons of London. With 111 meters heigh, St Paul’s Cathedral was the tallest building in London from 1710 to 1962.

>> Get your fast-track entrance to St Paul’s Cathedral

The Monument is a 61 meter high Doric column located near the London Bridge and was designed by Christopher Wren and Robert Hooke to remember the great fire that occurred in the city. The monument is a few meters from the point where the fire started.

The Monument is now open to the public and you can go up to the top of the column from where you can see the entire city.

Other works by Wren in London: reconstruction of Kensington Palace, Saint Dunstan in the East Church, Greenwich Observatory and Sheldonian Theater (Oxford).

Victorian architecture refers to all the buildings that were built between 1837 and 1901, during Queen Victoria’s reign. In London there are many buildings that belong to this period.

Architecture was a demonstration of splendor during the reign of Queen Victoria. These are some of the most important Victorian buildings:

One of the most iconic buildings from the Victorian era is St Pancras Station, from where all trains depart for international and domestic destinations. On the station facade is the St. Pancras Renaissance Hotel, which was originally the Midland Grand Hotel opened in 1873.

Next to St Pancras you can find King’s Cross, built between 1851 and 1852, and also a clear exponent of Vicorian architecture.

It is also a very important building for Harry Potter fans since platform 9 ¾ from where the Hogwarts Express departs is located at King’s Cross. 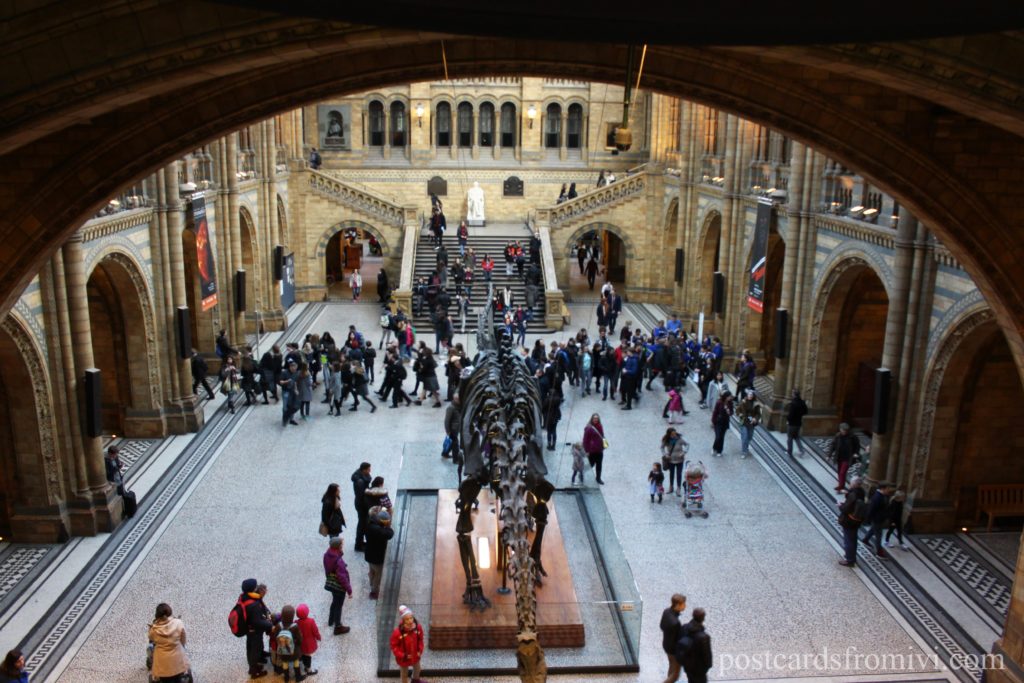 The Royal Albert Hall is a concert hall located in South Kensington neighborhood. This construction was born because of the idea of Prince Albert (Victoria’s husband) who proposed creating a series of buildings in this area for the culture and education of citizens. 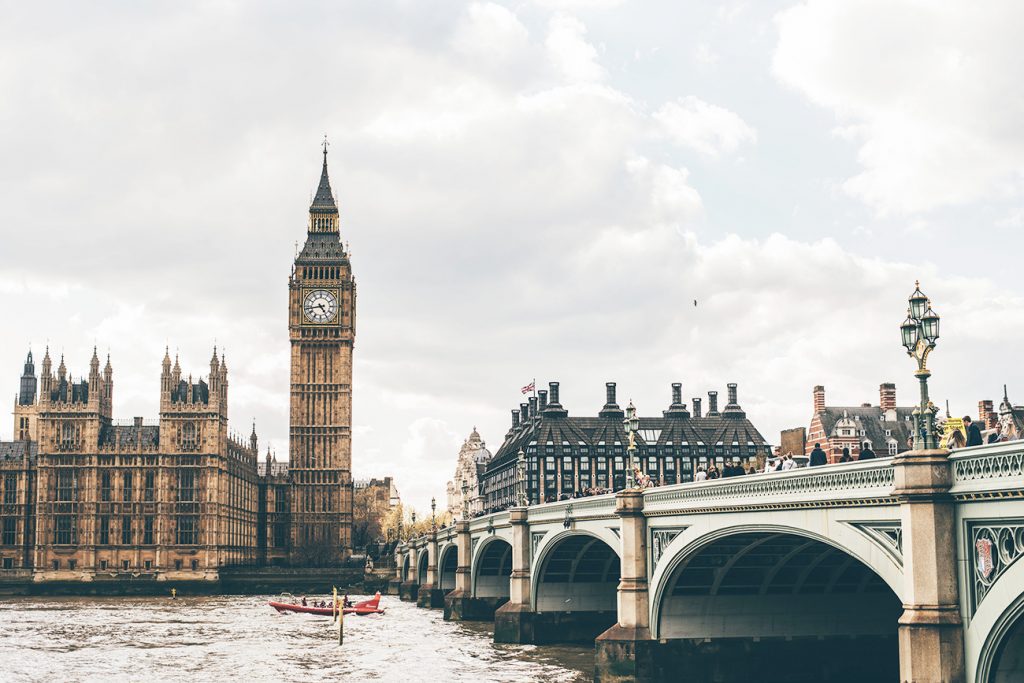 Without a doubt, this building is one of the most famous icons in London, along with its tower that houses the Big Ben. The Palace of Westminster houses the two houses of the Parliament of the United Kingdom. The building is a clear example of the neo-gothic style, framed within historicism. 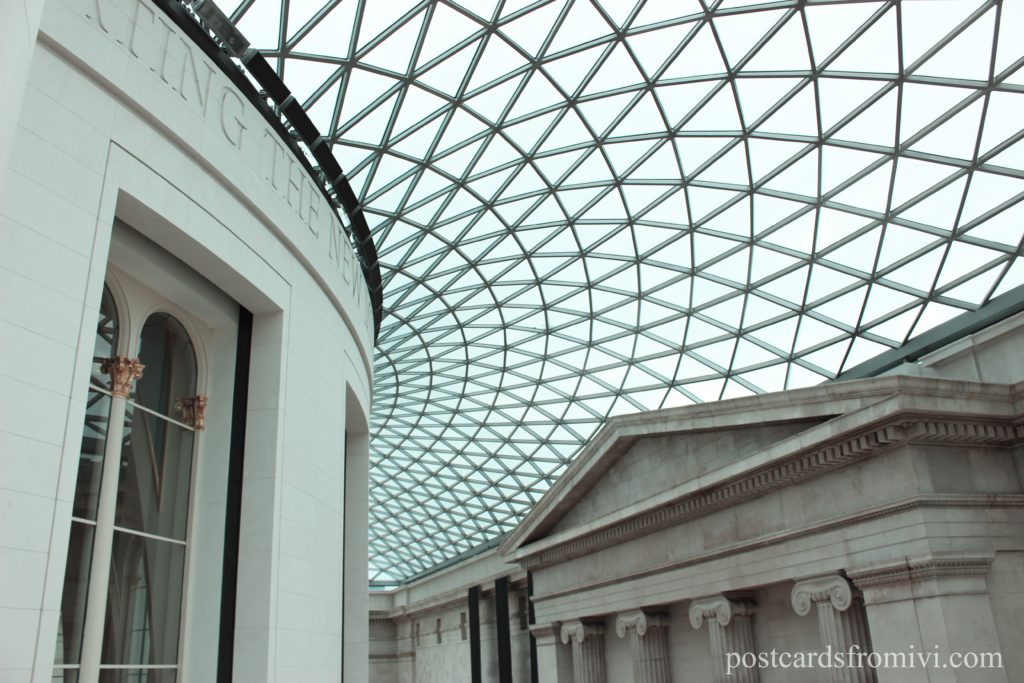 The British Museum was the first national museum in the world. The museum began in a 16th century mansion and when this place became too small due to the huge collection, a new neoclassical building was built on the same site.

Modern and contemporary architecture in London

Many of London’s modern buildings (especially skyscrapers) are located in the City of London, the financial district.

However, there is also a lot of modern and contemporary architecture scattered throughout the city, intertwining with Victorian and medieval buildings. 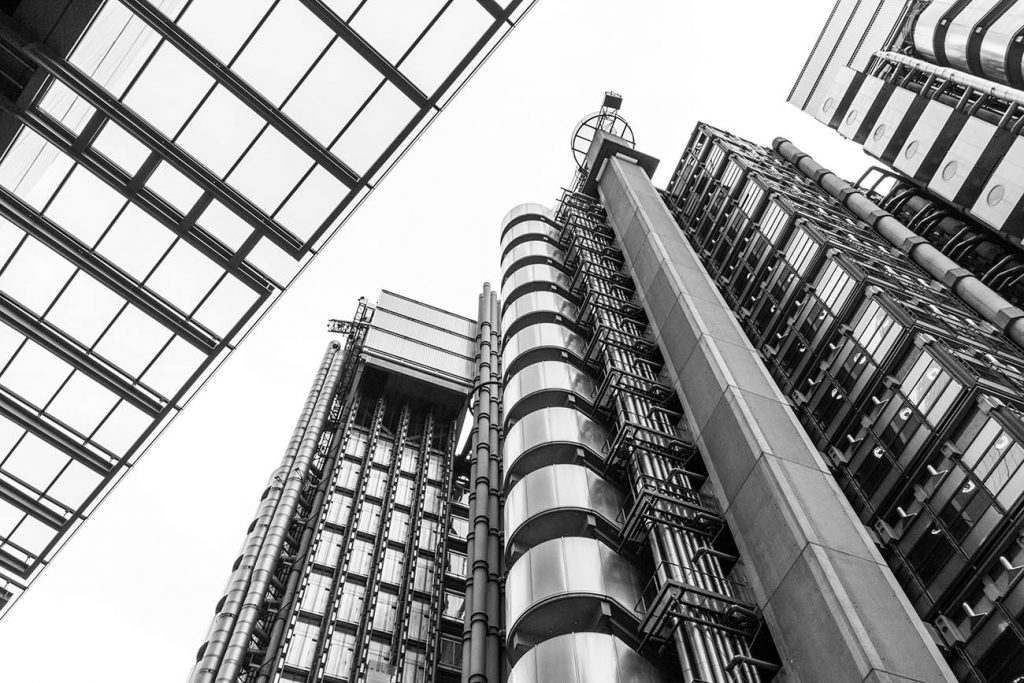 This is one of my favorite buildings in the city. It is a high-tech style building, where innovation and technology of materials is the main component. The building is the headquarters of the Lloyd’s of London insurance market and is located in the middle of the financial center.

As we can see in the Pompidou Center in Paris, all the services such as stairs, elevators and ducts are found on the outside. 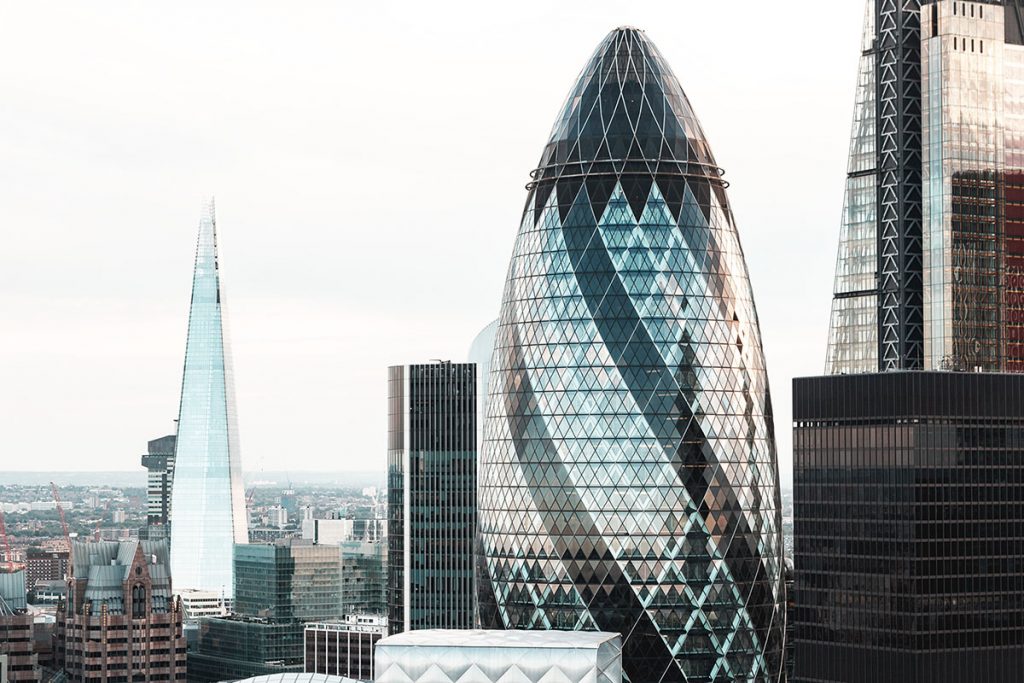 The Gherkin and The Shard in the background

If we talk about contemporary architecture in London, Sir Norman Foster is the architect who did shaped the city’s skyline. His most popular work is the 30 St Mary Axe building, better known as “The Gherkin”. This building is also located in the city and is 180 meters high.

It is a very efficient building in terms of energy thanks to the entry of natural light and ventilation. Its “oval” shape favors the flow of winds, reducing pressure on the structure.

The Shard is the tallest skyscraper in the UK with a height of 309.7m. It is a self-supporting structure with a pyramid shape.

On the 72nd floor you can find an observation deck: The View from The Shard, which offers 360-degree panoramic views of the city. 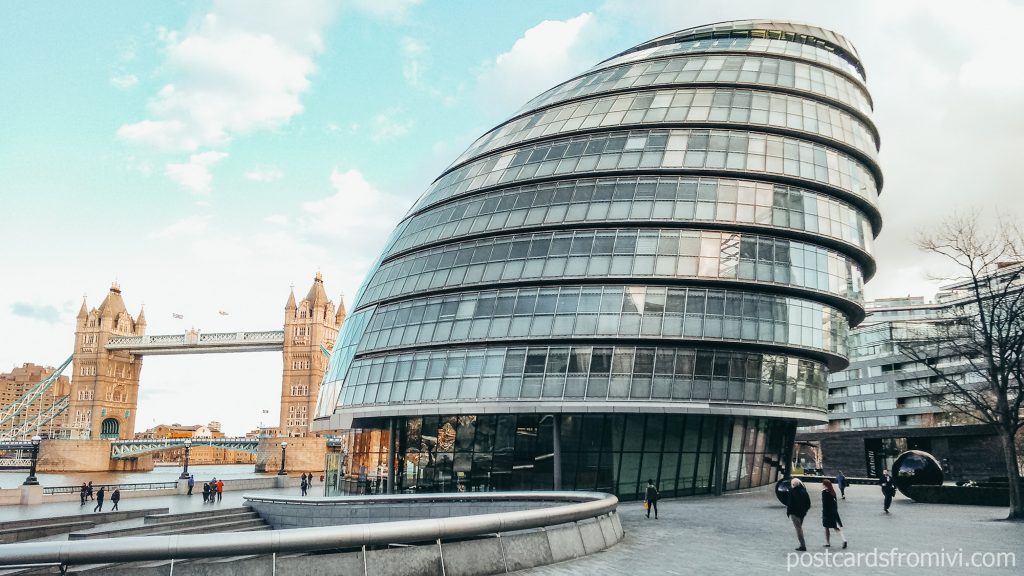 Another of Foster’s most popular buildings in the city is London City Hall. The building has a rather curious shape, as if it was thrown to one side and this is because it tries to avoid direct light coming from the south and absorb the northern light.

The glass on its facades expresses transparency and access to democracy, just as it is represented in the Reichstag building in Berlin, also designed by Foster.

Tate Modern is located in a building which used to be an old power station on the banks of River Thames. The architects preserved the industrial character of the space, leaving the brick walls and steel structure exposed.

Another modern building that defines the city of London skyline is 20 Fenchurch Tower, better known as the “walkie-talkie” because of its shape. On the top floor of the building there you can find Sky Garden, considered the highest public garden in London. Its access is free but it is necessary to book the tickets in advance. 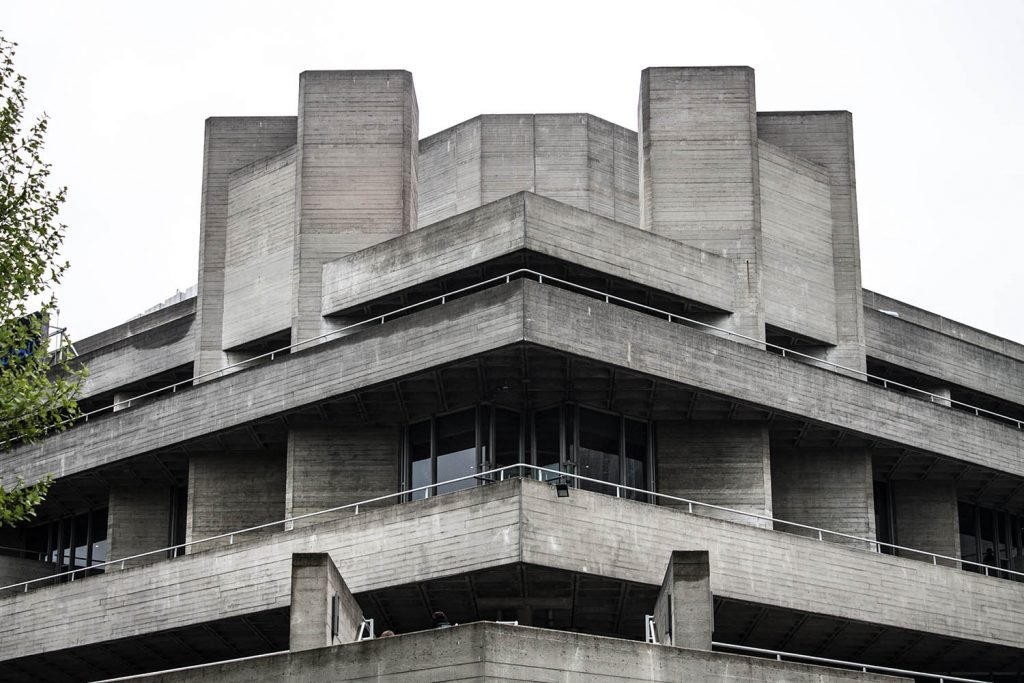 One of the most representative buildings of brutalism in England. The architect based the design of the theater on the concept of “architecture as urban landscape” using forms that break down the volume of the building, integrating with the urban framework of the river’s border.

Another very important brutalist work is the building of The Economist magazine. The project consists of three buildings, one for the magazine, one for the club and a third for housing. The magazine building is a 53-meter tower at an articulated corner with studs that run from the top of the buildings to the ground.

There are many more buildings that I didn’t include in the list but you can find many more on this map with the best buildings in London. You can download it to your cell phone and use it during your trip:

If you want to opt for a guided architecture tour, check out this Brutalist Architecture & History Walking Tour where you will learn about the most notable brutalist buildings in Central London.

London is one of the most interesting cities. Have you already visited London? What is your favorite building?

Where to stay in Barcelona: best areas and...

What to see in Barcelona in 3 days