If you think of Thailand one of the first things that probably pops into your mind is elephants. This animals play a massive role in Thai culture and Buddhism. Unfortunately elephants have been used for tourism and in consequence tortured and taken out of their natural habitat. In this post I tell you about my experience in Elephant Jungle Sanctuary Chiang Mai.

Please note: I visited the sactuary in February 2017. This is only what I saw and experienced. Before you decide to visit the sactuary I recommend that you read the latest comments about it on Tripadvisor forums.

Elephant activities are so touristic that some people travel to Thailand just to see them and to finally get, no matter how, a photo with an elephant. It’s easy to ignore that you are hurting the animals, so it’s important to read and inform yourself before doing any activity with animals.

These are some of the activities that hurt elephants, please do not practice them: trekking with elephants, elephants shows, pay to see how an elephant paints, pay to get a photo with an elephant, elephant rides.

Performing any of these activities is to simply contribute and increase their abuse. Why? Because for elephants to obey a technique called “Phajaan” is used. This technique basically consists in “crushing an elephant’s spirit”. Elephants are separated from their mothers at 4 years old, they are isolated and beaten by men until the elephant is so terrified that he is completely submissive to them. It’s something really horrible and the only way to stop with the abuse of these animals is to be a responsible traveler. 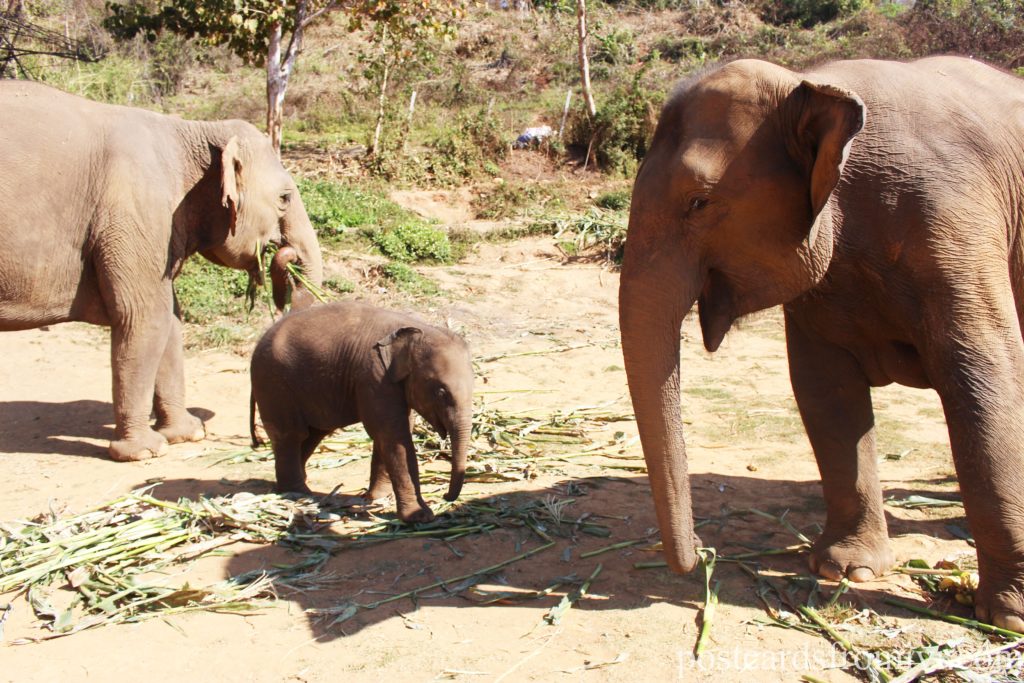 For thousands of years, elephants were used in Thailand as means of transportation, even in wars. Thai people used elephants to work, they would carry food, logs and any heavy stuff. Deforestation resulted into their habitat destruction causing Asian elephants to be endangered. In 1989 logging was prohibited, and elephants owners either sold their animals or put them to work in tourism, in search of new sources of income. Elephants were move to the city, to provide tourists with rides. This is completely traumatic and unnatural for the animal. I mean, why is an elephant in the city carrying people or performing tricks? This is not natural.

The only responsible and ethical alternative to see elephants in Thailand is to visit a sanctuary. The most common city for doing this is Chiang Mai, in the North of the country. Unfortunately you should also be skeptical about sanctuaries since many of them are fake still chain their elephants and keep them safe just to make money. The truth is I wasn’t even sure of visiting Chiang Mai and an elephant sanctuary, but it turned out to be one of the most amazing experiences. 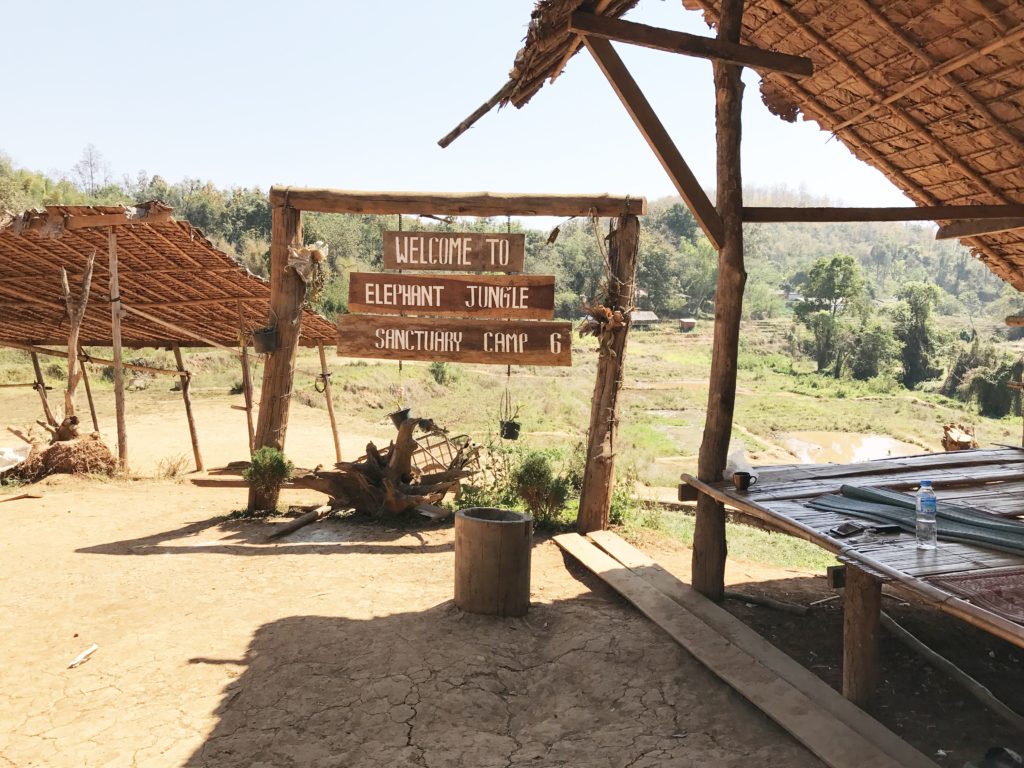 My boyfriend and me opted for the half-day visit. Around 7 am we were picked up from our hotel in Chiang Mai, we picked up other visitors and arrived to Elephant Jungle Sanctuary about an hour and a half later. 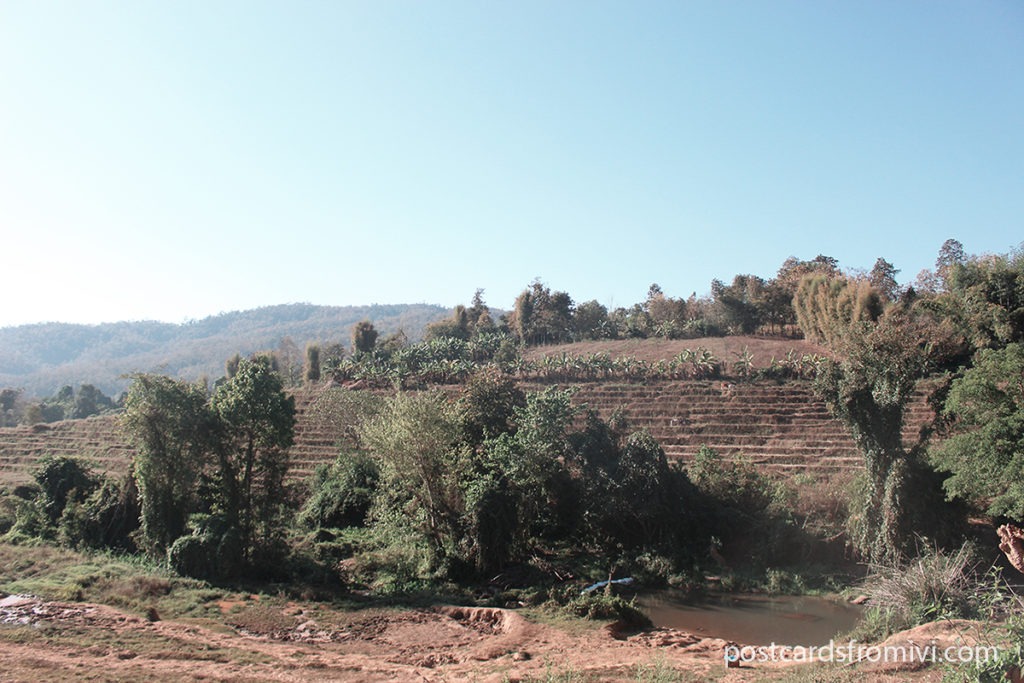 Upon arrival, we had an informative talk where they explained us about the sanctuary, the history of elephants in Thailand, which elephants were in the sanctuary, how to behave around the elephants, etc. They also explained us why we shouldn’t ride them: even though elephants are large creatures, their vertebral columns were not designed to carry weight. Their vertebrae is different from the horses. It doesn’t matter if you ride them with no chairs: riding is harmful and tortuous.

Elephant Jungle Sanctuary works with the Karen people, an ethnicity from the southern Myanmar. Karen people live in areas in which are typically natural elephant habitats so visitors are given traditional Karen clothes so the elephants feel comfortable with us. 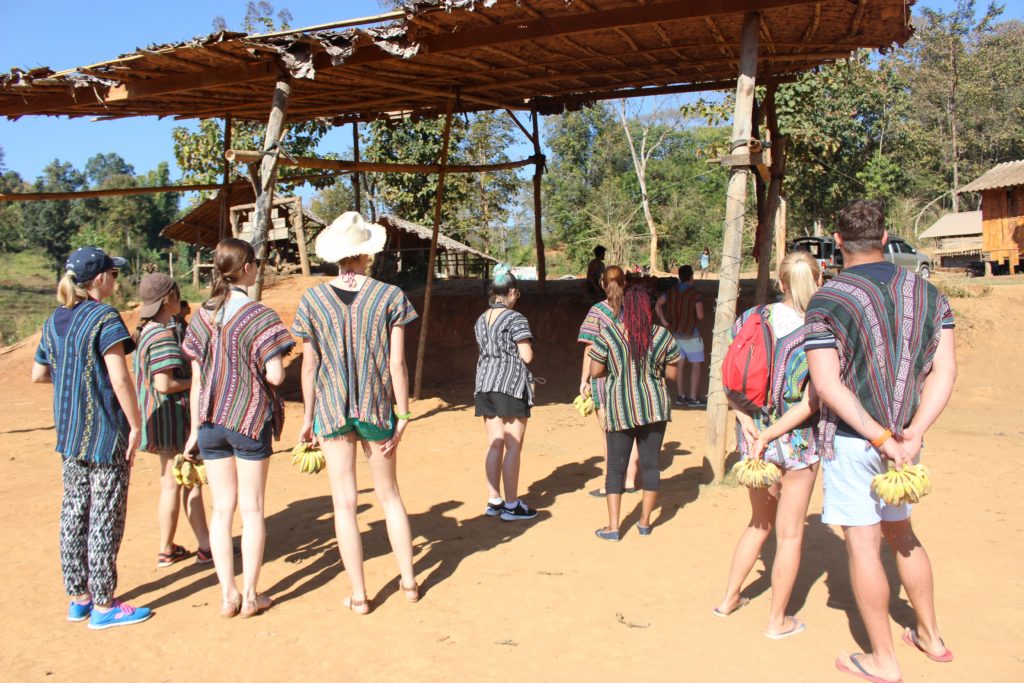 After being informed and dressed in traditional karen clothes, it was time for the first activity with elephants: feed them. At first, we were a bit scared because they are really huge and powerful animals! But after a minute we became used to them and realize how calm and beautiful creatures elephants are. For about an hour we spent time interacting with them, feeding them with bananas and learning from their behavior. We were lucky to see two baby elephants which were the cutest thing I’ve ever seen. 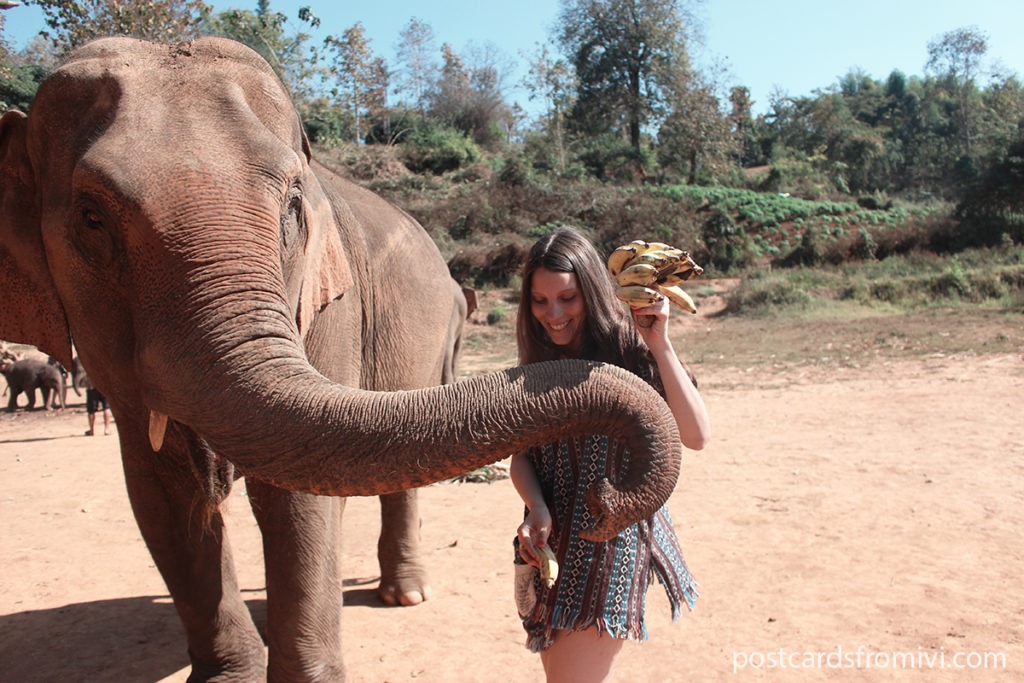 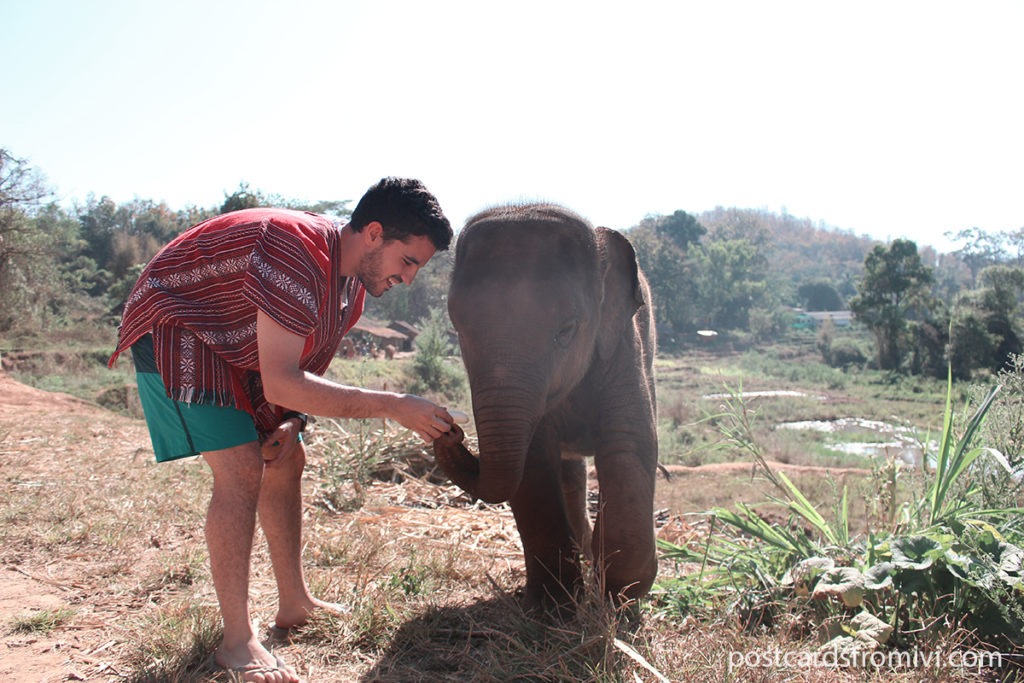 After feeding them it was time for the second activity: bathing them. To be honest, this activity felt a bit forced. Obviously elephants didn’t go themselves into the mud, they were encouraged to do so. It was something like telling a kid who doesn’t want to shower to take a shower. The handlers explained us how we had to bath them so elephants didn’t feel uncomfortable. First we covered the elephants and ourselves in mud, and then we wash them in a river. Elephants seemed to enjoy the water and to be cooled down on that hot day. But I repeat, it felt forced as I don’t think elephants need humans to have a bath. 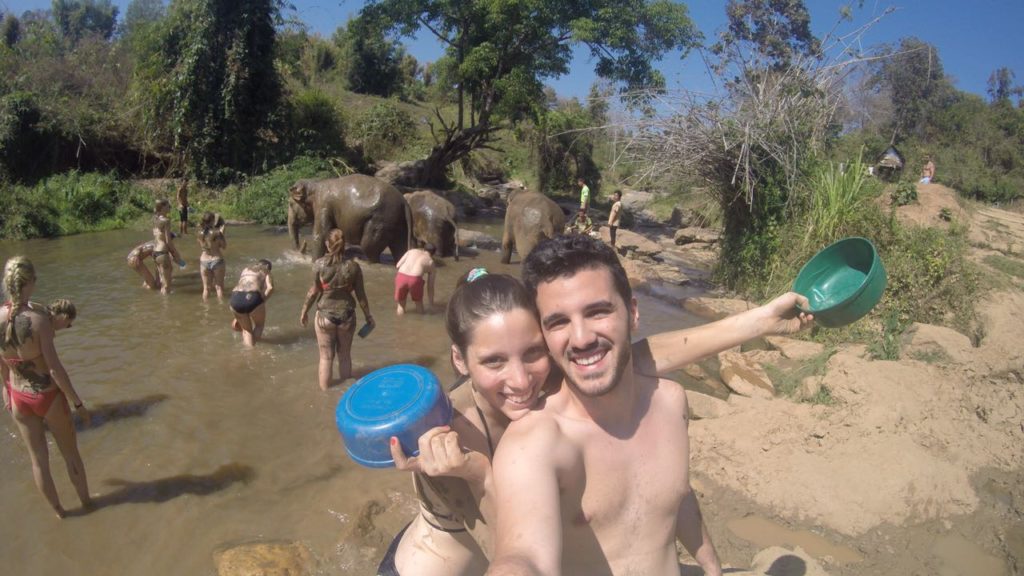 After the bath, we went back to the camp, used the outdoor showers and had lunch. Lunch was included in the visit and it consisted of a buffet lunch with typical Thai food, yummy curry and fresh fruit for dessert. Later, we spent some time in talking with the caregivers and other volunteers. Finally it was time to say goodbye to the elephants and go back to Chiang Mai.

Visiting an elephant sanctuary was an activity that I wasn’t sure about doing but ended up being one of the most beautiful experiences in my trip to Thailand. I think Thai society is changing and slowly leaving behind the domestication methods that hurt the elephants.

As I was able to see in the few hours I spent in Elephant Jungle Sanctuary Chiang Mai, elephants were healthy and taken care. When we asked why they were in a sactuary and not in the wild, they explained they were elephants rescued from touristical activities. They were born in captivity and wouldn’t survive if put in the wild from one day to another. Also, if they’d leave them completely on their own, they would be catched by people to use them again in harmful activities. Sanctuaries are the best option for them. It’s not total freedom but at least they are in their natural habitat and have an enormous space to walk around.

I felt comfortable and saw the elephants were treated well the whole time I was there. Of course this is only my experience and I know Elephant Jungle Sanctuary has locations in other parts of the country were there aren’t good comments about how they treat the elephants.

Do not ride elephants, do not practise any activity that is not ethical, do not contribute with animal torture. If you want to see elephants, visit a sanctuary. Read and inform yourself before your visit to find a place where elephants are loved, there are no chains or torture methods and there is no riding involved. Elephant Jungle Sanctuary is a great place to see how elephants can have a new happy life.

Have you ever visited an Elephant sanctuary? Where?

Click here to see all blog posts from Southeast Asia

How to visit Dubai on a Budget

It’s really great you mentioned all the activities that shouldn’t be done so we can protect the elephants! It seems like you had a blast there with all of the stuff you’ve done. Is one day enough?

Thank you Agness! One day is enough but I could have stayed there more time to feed the elephants and just observe them, they are beautiful animals. I think the overnight visit must be great to see how the sanctuary works.