Barcelona is an irresistible city for lovers of architecture as it’s the place with the greatest presence of modernist buildings. In the heart of the Eixample district, stands one of the great works of Catalan modernism: the Casa Amatller and you can’t leave Barcelona without visiting it if you like architecture.

When I moved to Barcelona, ​​the Casa Amatller was one of the modernist buildings I was more anxious to visit. This modernist jewel is located on the famous Paseo de Gracia Avenue, in a street full of beautiful buildings known as “the block of discord”. This block, bounded by Aragón and Consell de Cent streets, bears its nickname due to the professional rivalry that existed between Gaudí, Lluís Domènech i Montaner and Josep Puig i Cadafalch, since 3 major works by the renowned modernist architects were built there: the Casa Batlló by Gaudí, Casa Lleó Morera by Montaner and Casa Amatller by Cadafalch.

Planning your trip to Barcelona? Read What to see in Barcelona in 3 days

Casa Amatller was designed by Josep Puig i Cadafalch between 1898 and 1900, and was commissioned by the chocolate businessman Antoni Amatller. The history of the Amatller family is very interesting since there were 3 generations that dedicated themselves to the chocolate industry, forming one of the most recognized companies of the 19th century: Chocolates Amatller. When Antoni Amatller took over the family business, he introduced advertising posters and a collection of trading cards, which took chocolate consumption to another level.

Antoni Amatller lived in the house with his daughter Teresa, who was the only heir of the house and created the Institut Amatller Foundation for Hispanic Art in 1943 to preserve Casa Amatller and its heritage. In 2015 the building was opened as a museum house and today the residence of the Amatller family can be visited by everyone.

Josep Puig i Cadafalch combined various architectural styles on the façade of the house: Romanesque, Catalan Gothic and Flemish. This facade, so colorful and full of ornamental details, invites us to go to the central patio, from where a large staircase leads to the 1st floor where the rooms were located. In the ground floor is Fabroit, a beautiful coffee shop where you can have the most delicious hot chocolate in Barcelona.

You can visit Casa Amatller on your own with an audio tour or on a guided tour. The price difference is not much so I strongly recommend taking the guided tour.

The guided tour of Casa Amatller begins in the inner courtyard located on the ground floor, just in front of the large access staircase. At the beginning of the tour you will be given you some shoe covers that you have to wear throughout the visit, in order to preserve the floors of the house.

The dining room is undoubtedly one of the most incredible places in the house. The large window steals all the prominence of the space, which you will notice is one of the brightest in the house (the rest of the house is generally very dark, as this helps preserve the original materials). In Catalan “Amatller” means almond tree, so there are many details with the almond blossom throughout the house, including the dining room. Next to the dining room is the music room, a very common space in houses at the time, mainly used for social events.

During the visit you will also access Teresa and Antoni Amatller’s room. Teresa’s room was one of the most difficult areas to restore since over the years and the emergence of new trends, she changed many of the original furniture that had been specially designed for the house. Her bedroom is completely covered in floral wallpaper and has a beautiful window that overlooks Paseo de Gracia street. It adjoins a sewing room and an en-suite bathroom.

One of the things that stands out about Casa Amatller is the collection of glass pieces that Antoni, and later his daughter, collected. There are more than 750 objects from different styles, periods and places in the world that can be seen on display in the house.

The guided tour ends in the museum cafeteria, where you can buy Amatller chocolates. This area of the house used to be the old kitchen and part of the services, but its original state wasn’t preserved.

Guided tours of Casa Amatller are available in Spanish, Catalan, French and English. Keep in mind that the groups for the visit are small, so it is convenient to book your tickets in advance through the Casa Amatller website or here.

I highly recommend taking the Casa Amatller guided tour if you love architecture or simply want to visit a not so famous building of the Catalan modernism. Many details and curiosities of the house and the family are provided that make the visit entertaining.

More tips for your trip to Barcelona:

Book a private transfer from the airport

Other useful posts about Spain: 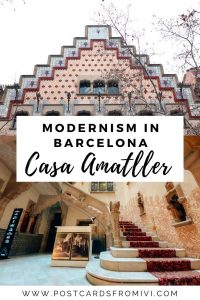 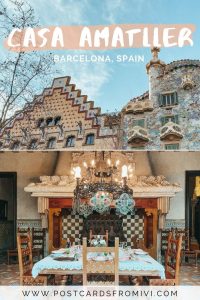 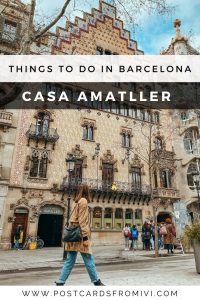 What to do in Milan in 3 days

Things to do in Rome in 3 days

The best beaches in Costa Brava